Fun fact! I used to be a server at Marie Callender’s. When hungry customers would come into the store they would always look forward to the cornbread and pies. And the potato cheese soup. I remember one man just ordering the potato cheese soup. When I went back into the kitchen and saw that we were out of the beloved soup I was sad for him. I told our manager and she whipped up another batch of the soup while the man waited patiently. He waited like 45 minutes just for a cup of soup.

The soup is simple it’s just potatoes, cheese, some dairy and a few other ingredients. For me personally I like to eat a cup of this soup with a salad or to start a meal. It’s delicious but it’s also quite rich. I brought this soup to our Halloween block party and everyone loved it. If you love Marie Callender’s creamy potato cheese soup I bet you’ll love my version too!

To make Instant Pot Marie Callender’s Potato Cheese Soup I used my 6 quart Instant Pot Duo 60 7 in 1*. I love this Instant Pot because it has the yogurt making function which I use almost weekly.  It has two pressure settings (high and low), and there are also little slots in the handles so that you can rest the lid there instead of putting it down on your counter-top.

If you don’t have an immersion blender* you can add half of the soup to a blender and pulse a few times. 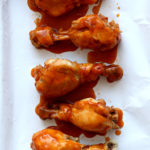 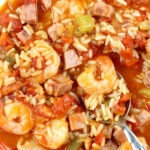