Instant Pot Praline Pecan Cobbler–a gooey, caramelly praline pecan cobbler dessert that will blow your socks off. With a scoop of vanilla ice cream or whipped cream it tastes like heaven in your mouth.

A few weeks ago my husband and I visited Nashville, Tennessee for a few days. We were told by friends that we must eat at a restaurant called Puckett’s and order the skillet pecan cobbler. We did as we were told and have been dreaming of that dessert ever since.

Let me get one thing straight. I would choose a dark chocolate brownie and ice cream over any non-chocolate dessert about 99% of the time. But after trying the pecan cobbler at Puckett’s I was blown away. I’m not a nut fan and I’m not even a pecan pie fan but this dessert was to die for.

So of course I had to come home and try to recreate it to the best of my ability. And I must say that it turned out pretty darn good. My husband said, “this is just as good as what we ordered at the restaurant!” I agreed. My version was a little more moist, like a bread pudding. The restaurant’s version was more of a traditional cobbler. But both were good. However since we don’t have a Puckett’s in our neighborhood we will have to live with the homemade version until we can visit Nashville again.

I would love to know if you like this dessert as much as we did! Please try it soon and let me know what you think.

What Equipment Did You Use?

To make Instant Pot Praline Pecan Cobbler I used my 6 quart Instant Pot Duo 60 7 in 1*. I love this Instant Pot because it has the yogurt making function which I use almost weekly.  It has two pressure settings (high and low), and there are also little slots in the handles so that you can rest the lid there instead of putting it down on your counter-top. You can also use an 8 quart Instant Pot to make this recipe.

I used an OXO sling/trivet* to lower my pan into the pot and to get it out. This sling is so handy for so many recipes. For example I used it for Instant Pot Taco Meatloaf the other night.

The cobbler was baked in a 7 inch by 3 inch Fat Daddios cake pan*. You can also use a bundt cake pan for this recipe.

A gooey, caramelly praline pecan cobbler dessert that will blow your socks off. With a scoop of vanilla ice cream or whipped cream it tastes like heaven in your mouth.

Praline Pecans are pecans that are coated in a sweet and crunchy coating. I found a can of praline pecans are Smith’s (Kroger). They were with the other jarred nuts and were the Private Selection brand. They are super tasty! 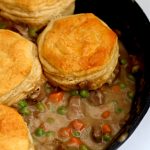 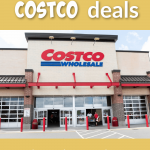 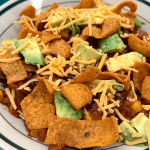 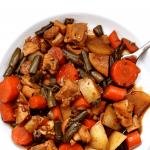