Get the INSTANT POT beef and barley soup recipe here

Greg ate 3 bowls of this last night. I think it’s a keeper! We loved the beefy flavor and the chewy barley. My kids liked it too…mushrooms and all. Not typically something you’d think that kids would like but good food is good food.

Barley–I used pearl barley that I purchased from Winco in the bulk section. I have not tried this with other types of barley. Whole barley takes a longer time to cook but if you’re going to be out of the house for 10 hours you may want to try that instead. It will hold up better.

Beef–I bought a family pack of stew meat from the grocery store. I cut the bigger chunks of beef in half with kitchen shears. Sometimes stew meat is not cut uniformly. I’d rather have smaller bites of beef than huge chunks of beef. You can also buy a chuck roast and cut it yourself. I like cutting the roast when it is slightly frozen. I like to throw the roast into the freezer for an hour and then cut it up. It really makes it so much easier.

To make Slow Cooker Beef and Barley Soup I used my Ninja Auto-iQ 6 Quart Slow Cooker.* My favorite feature of this slow cooker is that it has a stove top function. This is perfect for browning the beef and sauteing the onions.

I’d love to invite you to join my 365 Days Email List. You’ll receive a daily email from me about all things Instant Pot or slow cooker. Sign up in the gray box below.

A savory brothy soup with tender bites of beef, chewy barley and vegetables. 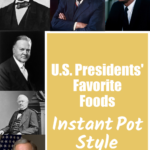 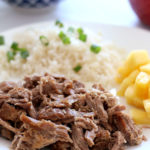 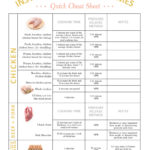 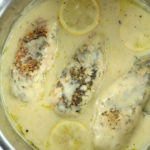 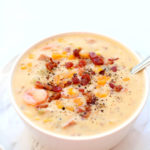