Instant Pot Kalua Pork—this Hawaiian style pork is easy to prepare, with only 4 ingredients and a hands off cooking method. And it tastes amazing! It will soon become a family favorite.

Each week in 2020 I’m sharing a recipe inspired by one of the 50 states. So far I’ve covered Alabama, Louisiana, Utah, Minnesota, Colorado and Idaho. Today’s recipe is inspired by the Aloha state: Hawaii.

I think most of us can agree that Hawaii is one of the most desirable states to visit in the United States. With its tropical climate, gorgeous beaches, diverse natural scenery and active volcanoes Hawaii has plenty to boast. And what about the food in Hawaii? Uh, yum.

Today’s recipe is inspired by Hawaii’s luau pork (kalua pork) that is traditionally cooked in an underground oven called an Imu. The process of cooking a pig in an Imu is quite intense. You dig a 2-4 foot deep pit, fill it with kindling and rock and light it on fire. After several hours the kindling turns to coal and tropical leaves are placed on top of the coals. Then the pig is placed on top of the leaves. Leaves cover the top of the pig and the dirt that was dug out earlier is used to cover up the hole to keep the heat in. The pig is cooked for at least 8 hours.

I’m pretty sure if I sent my kids or husband out to the backyard to dig a hole that was 4-6 feet deep they would revolt within the first 10 minutes. Plus it’s winter here and I don’t want to go outside to cook. Not to mention that we don’t have any tropical leaves to surround the pork with. This method, although quite fascinating, is just not going to happen around here.

Enter the Instant Pot (or slow cooker) with it’s magical powers! A beautiful kitchen appliance that can turn tough meats to tender in less than 2 hours from start of prep to end of shredding.

Start off by trimming excess fast off of the pork. It will need some fat on there but you don’t want it swimming in the fat. Then poke the pork with a fork about 8 times. Rub the salt all over the pork and then place it in the Instant Pot with some broth. Pour the liquid smoke over the meat, cover the pot and you’re set! I like to cook by boneless pork shoulder about 20-25 minutes per inch of thickness. So if you have a huge pork shoulder it will take longer than a smaller cut. I also like to use 1 tsp of the Hawaiian sea salt per pound of the meat.

You may be thinking that this recipe is so simple, with such few ingredients that it is not going to be great. I promise it is really so tasty! My daughter just had some leftovers for lunch and said, “Mom! You need to make this more often. It is so good.” We served ours with Instant Pot coconut rice (recipe coming soon) and fresh pineapple. It was a truly delicious meal!

This Hawaiian style pork is easy to prepare, with only 4 ingredients and a hands off cooking method. And it tastes amazing! It will soon become a family favorite.

Pork: For pulled pork, the standard rule of thumb is one-third to one-half pound of meat per person. When cooked and shredded, pork shoulder will lose around 30 percent of its weight. Use pork shoulder (also known as boston butt or pork butt). I have also used a pork picnic roast and pork blade.

Red Hawaiian sea salt*–You can buy this online or some grocery stores carry it. I have also used pink himalayan sea salt which can be found at most grocery stores (including the bulk bins at Winco).

Liquid smoke — to add that smoky flavor. Found in my grocery store next to the barbecue sauces. For this recipe I prefer hickory or mesquite flavored liquid smoke. 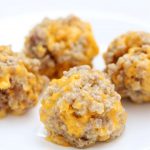 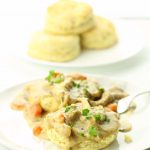 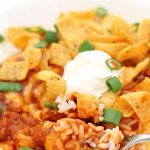 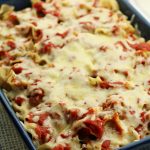 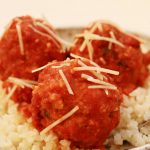 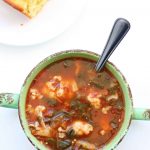