If you’ve read my blog lately, you probably have noticed that I have used chicken bouillon a lot in my soup recipes.  It’s convenient, takes up little room in my pantry and is much cheaper than broth.

Many have asked “can you substitute chicken broth for bouillon and vice versa?”

What exactly is the difference between chicken stock, chicken broth, and chicken bouillon?
Well, I researched this a bit and it’s hard to come up with an exact definition because there is a lot of variety in the information that I read.  But from what I understand…


Stock is the liquid obtained from the simmering together of meat or bones with vegetables, seasonings, and water.  It can be made easily in the slow cooker, actually, because it is best to simmer for many hours.  Homemade stock can be frozen.  Stock is the base of many recipes but would not be consumed on its own.

Broth is made with actual meat (not just the bones) and, so, has a richer flavor.  It also usually has salt added to it, whereas stock does not…so the sodium content is higher.  Broth could be consumed on its own because it is basically a soup. 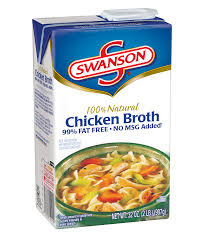 Bouillon (cubes, granules or powders) are dehydrated broth that is formed into a cube or powder.  Usually, they have a lot of sodium.  There are a lot of different brands.  I prefer Shirley J because you use half as much and the flavor doesn’t taste processed.  I also like it because it dissolves very easily because it is a very fine powder.  I know a lot of people use Better Than Bouillon, but I have yet to try it.  When I use bouillon in the place of broth I don’t add any other salt in the recipe because bouillon already has a lot of salt in it.  Then I salt to taste at the end.

So there you have it!  If you have any other helpful information on this topic, please leave a comment.