Karen was our reporter.  Let’s go straight to her now to see who the winner of the close game was. 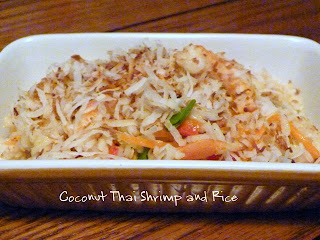 Here are the results of my testing. I chose to make the Zuppa Toscana and the Coconut Thai Shrimp and Rice.

First, a couple of quick notes on the recipes. Zuppa Toscana…. the only thing I did different was to slice the potatoes rather than cube them. I had just been to our Olive Garden and had the soup taking note of it visually and taste wise (it is my most FAVORITE soup!) It might be good to specify the size can for the chicken broth since there are so many different sizes these days. I assumed it was the 14.5 size.

If I were to make changes I would say probably some kind of really thin ham rather than the bacon bits. And mine did cook in a 4 qt. crockpot on high and it only took 3 hours. 4 hours would have probably been too much at that temperature

Then with the Coconut Thai Shrimp and Rice recipe. I kept it as written. Wow! What lovely smells the herbs and lime made together! I felt like I was IN Thailand! I felt like it was easy to prepare even though it looks like a lot of ingredients. When I started, I just put the items together, kind of sous chef style, mixing what went together in the directions below. I was wondering just how the raisins would be after cooking them and they are definitely the right choice. Nice and plump and no overpowering flavors from them.

What I might change/add….. well, it was good but sort of tasteless, my tongue just wanted something more coconutty. I did the toasted coconut on the top and that helped but maybe finding a way to add coconut milk along with the broth might be good. I don’t do a lot of cooking with coconut milk so I’m not sure how much it would take to have that flavor but I think the coconut milk and lime would really go well together. Again, a quick, relatively easy, VERY fancy looking results recipe. My family was impressed.

So the winner of this competition?

My family and a couple of friends really liked the Zuppa Toscana better! Yay!! Clap clap clap clap!! It was close but the men in the family I think just liked the meat and potato thing better. I was surprised because I thought for SURE they would pick the Coconut Thai Shrimp and Rice but what I kept hearing about it was it seemed a little bland. So yeah, that’s how round one went. I’m excited to continue and see what dish wins and if you need testers for part two, I’d be delighted to help.

Thanks, Karen.  Great review and I think I will try using coconut milk next time with the shrimp dish.  p.s. zuppa is one of the most viewed pages on this blog