I am so excited for the guest post today! Stephanie from A Year of Crockpotting agreed to do a guest post for me. In 2008, Stephanie decided to cook in her slow cooker every single day for a year. She did it and she did it with all gluten-free recipes. She has a cookbook coming out in October. She is very talented, funny and she is basically my BFF, although she doesn’t know it yet. I had no idea that Stephanie cooked in her slow cooker everyday last year until after I started my project. I thought I was so original and awesome. “Man, I have a GREAT idea! I’m going to cook in my crockpot everyday for 365 days and then make a cookbook called 365 days of crockpot! I am so smart and I’m going to do something no one else has done before.” A few weeks after starting my 365 days I was googling recipes online and came across Stephanie’s blog. My bubble was burst. I guess I’m not that original afterall. Anyhow, here is Stephanie’s post (this is from her blog September 8, 2009) . This looks sooo good! 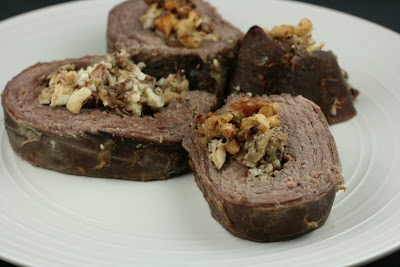 I had a bee in my bonnet yesterday to make something savory with fruit after the “icky” gingered peaches with chicken recipe. We all liked the turkey meatballs with apple and cheddar, so I decided to stick with apples. And we had flank steak. So I put the two together. This is a good meal. A very way good meal. A meal that I never in a gazillion years I would have ever attempted to make (or think up) without this wild and crazy year-of-crockpotting challenge. I googled apple stuffed flank steak in every word combination I could think of, and didn’t find anything I liked. So I made something up.
The ingredients: 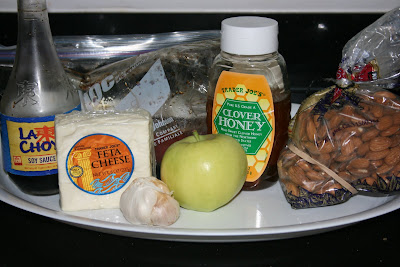 –1 or 2 pieces of flank steak (the filling will fill 2 pieces of meat)
–1/2 cup honey–
1/2 cup soy sauce (La Choy and Tamari wheat-free are gluten free)
–1 green apple
–1/3 cup raw almonds
–1/2 block feta cheese
–2 chopped garlic cloves
The Directions.
Marinate the flank in the honey and soy sauce overnight in the refrigerator, or for as long as you can (I did about 4 hours). In a mixing bowl, combine the feta cheese, the chopped garlic, a chopped (doesn’t need to be peeled) green apple, and the chopped almonds (psst. the almonds were measured out before they were chopped). Dump the flank steak and all the juice into your crockpot. Carefully pull out the piece of meat, and put it on a cutting board. Put a handful or two of the filling in the middle of the flank, and roll it up. You will have extra garlic, feta, apple, and almond mixture. It makes great salad topping–or use it to fill up another piece of meat. Place the meat seam-side down into your crockpot. If you’d like to secure the meat with twine or skewers, go for it. Cover and cook on high for 4 hours, or on low for 6-7. I cooked ours on high for exactly 4. Slice carefully, and serve. If the meat unrolls a bit, you can stick it back together with toothpicks to present nicely. Or don’t worry about it—it’s gonna get all chewed up anyway.
The Verdict.
Oh so good. This is really good. I am totally tooting my horn. HONK.

Here is what Stephanie has to say about her cookbook:

Make it Fast, Cook it Slow comes out October 13, and will have 338 of the best recipes from my Year of Slow Cooking Challenge. I learned so much about cooking with this challenge, and learned how to “think outside of the crock” and combine ingredients I never would have dreamed of before 2008. Sometimes it worked, like the Stuffed Flank Steak, and sometimes I failed miserably, like with the Gingered Chicken and Peaches. Due to a family intolerance, all the recipes on the site and in the book are gluten free, although it’s easy to ignore my notes if you don’t need to worry about gluten.