Two totally different teams.  How did they match up?  The winner is… 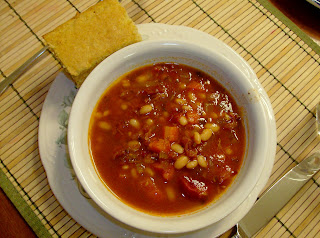 Gary was the reporter at this game.  What did you think of the game, Gary?

The Dijon Chicken was good (probably 3 stars), but lacked the real punch that would have pushed it into the next round. It was moist and good, but just needed a little something extra. (I used bottled lemon juice, so that may have made a difference, but we still probably would have gone with the ham and bean soup.

The Ham and Bean Soup is very similar to a recipe we have made quite a few times before. It is a reliable performer; great for using the ham bone and left-over ham. It has a little zip (from the chili powder) and the zing from the fresh lemon juice is a great addition (I added it right at the end). We also topped it with grated cheese and sour cream. We give it 4 stars