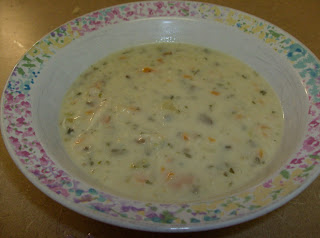 Dixie has the report of this contest.  Dixie, which recipe fared better in your mind?

The steel cut oats were very good. The oats were chewy and the raisins added a nice subtle, but sweet flavor. I was disappointed that the cranberries had seemed to just dissolve in the cooking. Granted, I did cook this longer than the 4-6 hours the recipe called for (since I do sleep longer than that!).

I was a bit unimpressed with the wild rice chicken soup when I tasted it after it had cooked all day. But that was before adding the roux and milk mixture, which gave it the extra good flavor to make it the winner in this contest. Both recipes will be made again, but since we have to choose a winner, we will go with the soup.

I love both of these recipes.  Yum!  The soup will be up against the french dip in the next round.